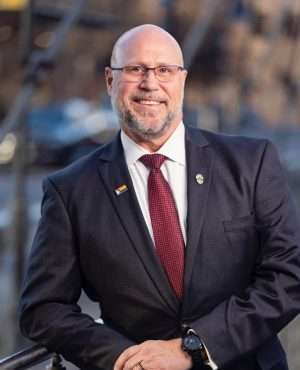 Michael Crumrine is a Sergeant with the Austin Texas Police Department with over 33 years of law enforcement experience. He is a sergeant in the Child Abuse Unit and supervises 17 detectives who investigate all manner of physical and sexual abuse of children. Sergeant Crumrine began his investigative career in the adult Sex Crimes Unit where he investigated felony and misdemeanor sexually related offenses against adult victims. He has also been a detective in the Homicide Unit, investigating homicides, suicides, accidental and natural deaths, and the Sex Offender Apprehension and Registration Unit, (SOAR), which took a proactive approach to monitoring and holding sex offenders accountable.

Sergeant Crumrine is a founding member and current President of the Lesbian and Gay Peace Officers Association – Austin, the first and only LGBTQ+ Peace Officers Association in Texas.  Sergeant Crumrine has written and trained nationally on the subject of intimate partner violence and sexual assault in the LGBTQ+ community. He continues to create training and policies for the Austin Police Department in regard to their interaction with the LGBTQ+ community.